GET RID OF BUNIONS WITHOUT SUGRERY

Programme for Correction of Pain and Shape of Bunions

Having combined all knowledge of hers (primarily, the knowledge of physiotherapy, reflexology, acupressure and Bowen technique), Aleksandra Maksimović, DPT in physical medicine, Magister in Bowen Therapy, Reflexotherapist, Professor in Integrative Medicine, designed Programme for Correction of Pain and Shape of Bunions, which has proven successful in practice in about 80% cases, without recurrence.

This treatment is performed for 60 minutes, once a week or every day, depending on the state of bunions, age and other priorities.

How and when can we help you when it comes to bunion issues? 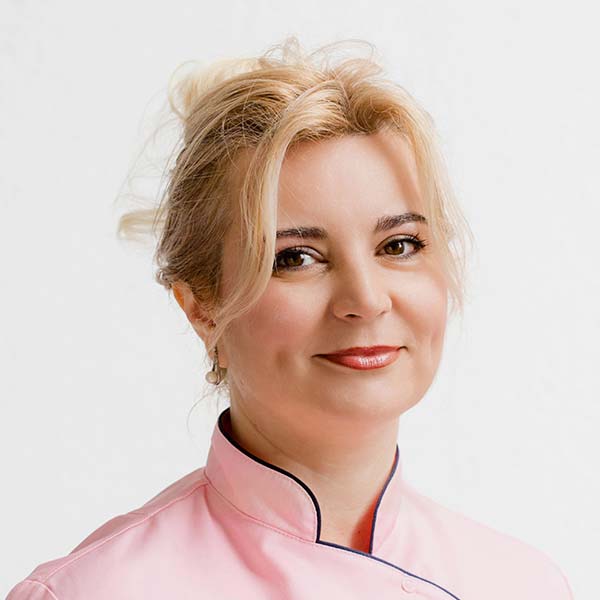 The treatment has been performed by Aleksandra Maksimović,
DPT in physical medicine, Magister in Bowen Therapy, Reflexotherapist, Professor in Integrative Medicine

“I use reflexology in order to receive an answer to what the causes of bunion occurrence are, and Bowen technique to reset the body and restore its balance. Bunions are just a protective reaction of one’s body, which is not safe; they are the extension of support. I have been working on reabsorbing that secondary creation, but at the same time, I give an impulse to the body to regain a healthy stand and posture.”

After the very first treatment, one can feel the condition improvement of the overall organism in terms of the reduction of back, knees, hips, feet pain, better circulation and better mood.

There are no contraindications to Bowen technique. It could be practiced on pregnant women and newborns, as well as people of all ages. Moreover, it is used as a preventive method in developed countries all around the globe.

M. age 65. Painful, inflamed, sticking out bunions – at the beginning, and then after 3 months of treatment. Therapy and changes are still in progress. 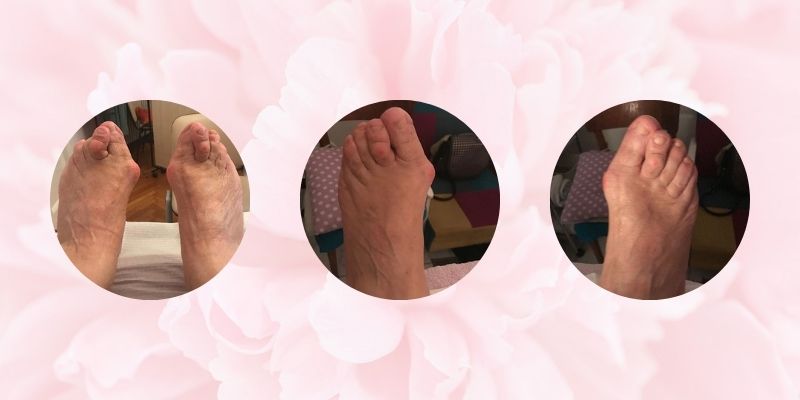 Before and after 8 months of once-a-week therapy. 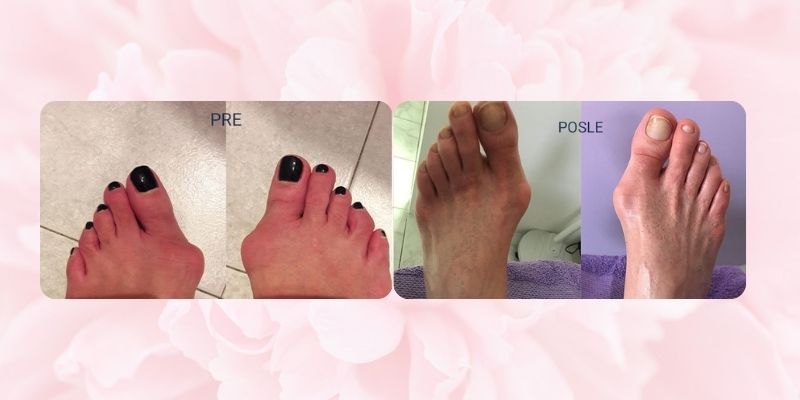 The developmental process of bunions – Slavica ( 52 ) during 14 therapies ( twice a week each ) – we got a smaller bunion, straight big toe, flexibility in the metatarsal region of the foot and joint of the big toe. Our goal is to make the bunion disappear completely, because we have eliminated the cause of its appearance. 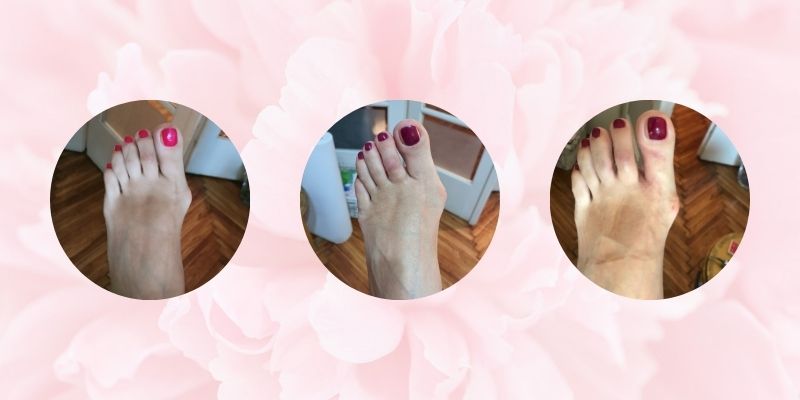 Results in the case of Nenad after 10 therapies. Nenad came to Alvita Plus Center with a painful grimace. My leg hurts terribly in the bunion area! I can’t wear anything, all my shoes are uncomfortable, the only solution is to walk barefoot! You don’t understand what a pain it is!!!! If you get rid of that pain, I will be so grateful to you!
This is how it all started… I asked him if he would remember what he had said at the beginning, because the pain will go away. The bunions will stay because they don’t go away that fast.
Nenad comes to therapies, he is pretty satisfied with the look of his feet. Bunion is barely visible. 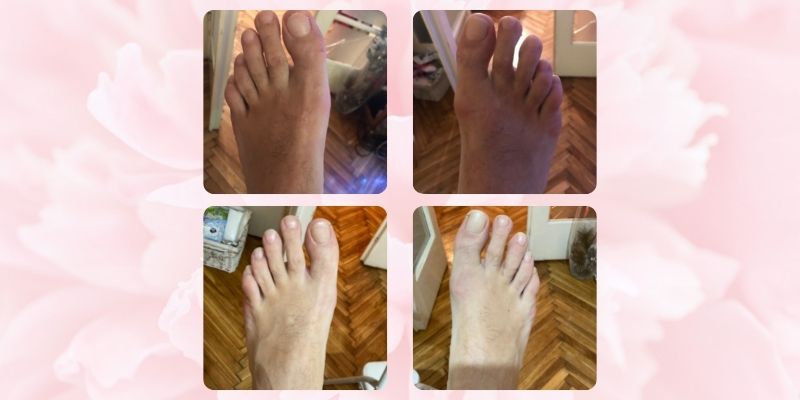 Result in the case of Alen after 5 therapies: absence of pain, foot flexibility, calm inflammation of the bunion, calm redness on the bunion, lightness in the foot and body. 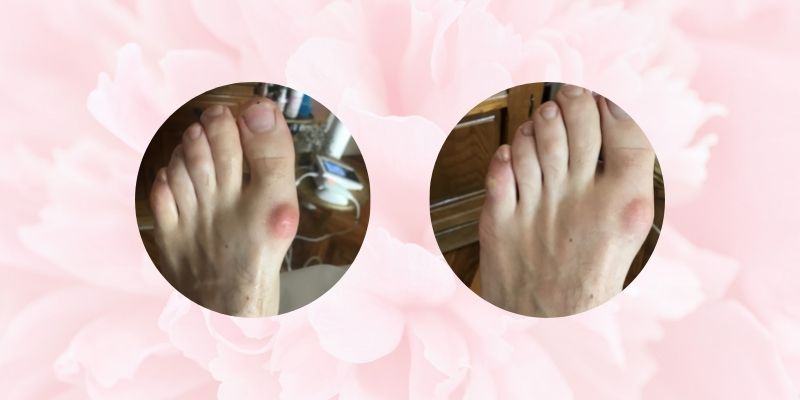 The foot is the final part of lower extremity. It should be statically strong enough to carry the entire weight of body, and it must be dynamically adjusted to the surface, i.e. it should lessen stamps on the ground, enable standing, walking and running.

The foot consists of 26 bones mutually connected by strong ligaments and secured by strong, long and short muscles.

While standing and walking, the foot has three fulcrums: heel and two points on the first and fifth metatarsal bone (under the big toe and little toe).

The initial formation of arches begins with child’s rising and walking, and it is clearly completed in the second year of child’s life.

What are the factors that contribute to the health of feet?

The statics of hips and arches is maintained by the shape of bones and strong ligament apparatus. The muscles of feet maintain the shape, which is functionally normal, as well as the elasticity of feet. As long as the musculature is functionally good, there is the coordination of muscles, and thus functional balance, the shape of feet remains normal.  When muscles become relaxed due to illness, injuries, overload, inadequate footwear, the feet relax.

Why and how should a foot examination be done?

A foot examination starts with an examination of the whole body by comparing the left and right side, in particular. A number of spine, hip and knee disorders could affect foot disorders.

Anamnesis must be extensive, particularly in terms of pain, fatigue, cramps and swelling. While examining the skin colour of feet and its tension, possible oedema is sought. During palpation, the heat of skin, pulse, and possible atrophy, fibrous changes in muscle tissue are monitored.

What can be noticed on this foot examination? What foot deformities are the most common?

Foot deformities can be divided into congenital (or inborn) and acquired.

Acquired static deformities are caused by the way of life, movement and work of modern people.

The changes, which occurred during the movement from the four-legged way of movement to the upright two-legged gait, are especially emphasised in the area of foot, which has become an independent organ, from the auxiliary organ for grasping, which serves to ensure standing and movement.

While humans were walking barefoot or in sandals, their feet were adjusted to the unevenness of surface, which is a vital functional stimulus for maintaining flexibility and strength. The civilisation with asphalt streets, uniform walking in flat areas, standing at work in industry, economy, hospitals, schools, banks or super markets, has led to a series of harmful consequences and so-called static deformities.

Obesity, overweight and lack of physical activity, as additional reasons for static deformities, should not be neglected.

A vast number of people suffer from a deformity known as flat feet. This deformity appears as an expression of disposition between foot strength and foot load, and they differ: lowered feet from slightly flat to extremely flat feet with the deformation of bone areas.

What are the deformities, which can occur when it comes to flat feet?

The feeling of heaviness, fatigue and tension in legs, foot, lower leg and thigh pain, as well as, lower back pain and the occurrence of static oedema in the feet.

How should flat feet be treated?

Contrast baths before going to bed, according to the defined protocol, walking in nature, barefoot walking on grass or sand during the summer, corrective exercises for feet, wearing medical shoes, with the heel height of 2cm for men, up to 4cm for women. Soles should be soft and flexible and the top of shoe should be wide enough to provide the room for the movement of toes. Narrow toe boxes press toes and shorten tendons and thus transfer toes over each other and cause corns, blisters, etc.

Very special attention should be paid to the sole of kids’ shoes, which should be soft and elastic, because otherwise, short sole muscles could be damaged and the freedom of ankle movement becomes limited.

Can flat-footed children do sports?

They can do those sports that strengthen muscles and do not lead to any impairment due to fatigue or increased body weight. Sports such as hiking and swimming are desirable, while skating, rollerblading, long jumps, running marathons, as well as long marches, are not recommended. Medical custom-made corrective insoles or orthopaedic shoes are recommended.

What are some common foot deformities besides flat feet?

The most common deformities are heel spur, plantar fasciitis, but the largest number of people suffers from hallux valgus, a deformity, which is widely-known as “bunion”.

Bunions occur more in the female population (as much as 90%), while men often have the problems with flat feet nowadays.

The inner side of the lower half of head of the first metatarsal bone is protruded and either an inflamed mucous fistula/bag develops there or the connective tissue enlarges. As this problem progresses, the position of big toe becomes more crooked than before (sometimes even up to 90 degrees), it also becomes rigid and arthritis and sever pain often occur over time. It results in the movement of toes, so that the big toe can move under or on the toe next to it. The occurrence of bunions is completely explained medically.

What are the types of therapy that can help with the occurrence of bunions?

The application of various physical medicine procedures, which encompass the non-invasive models of therapy, is included. One of them, applied in our centre, is medical acupressure and foot massage performed by a professional. Not only that this method relieves pain and inflammatory processes, but it also monitors the progress i.e. the reduction and change of the whole big toe and foot. In addition to working on the feet, it is necessary to improve the statics and balance of the whole body in order to use it for leg and spine correction therapies. The method is non-invasive and encourages the body to self-heal and full regulation through nervous and endocrine system, until the complete correction of the skeletal and joint system. Along with the therapy in the centre, it is necessary to apply home protocols with baths and corrective exercises for the muscles of the big toe and the whole foot. Carefully-selected shoes, made of soft leather, with a heel 2-4cm, are advisable, never flat shoes! As an additional therapy custom-made corrective insoles are always recommended.

There is a scope of different views on surgical indication and there are numerous types of surgeries. Personally, I am a supporter of non-invasive methods, which can assist people in helping themselves and thus stop a process of impairment. If the process has already progressed, a surgery can be the final solution with the emphasis on the story about the consequences and postoperative course, which requires some time for the complete recovery. – explains Aleksandra Maksimović.